I want to share the eulogy I wrote for the program at Samuel’s memorial service. What I ended up writing was more like a summary of his time with us. As I looked back at my calendar for the months of my pregnancy, I realized Samuel had done a lot in his brief life! I asked our friend Dayle who works at the church office to let me know if I needed to shorten it to fit in the program. Instead, she redesigned the program, adding an extra page so we wouldn’t have to leave out a single detail! 🙂 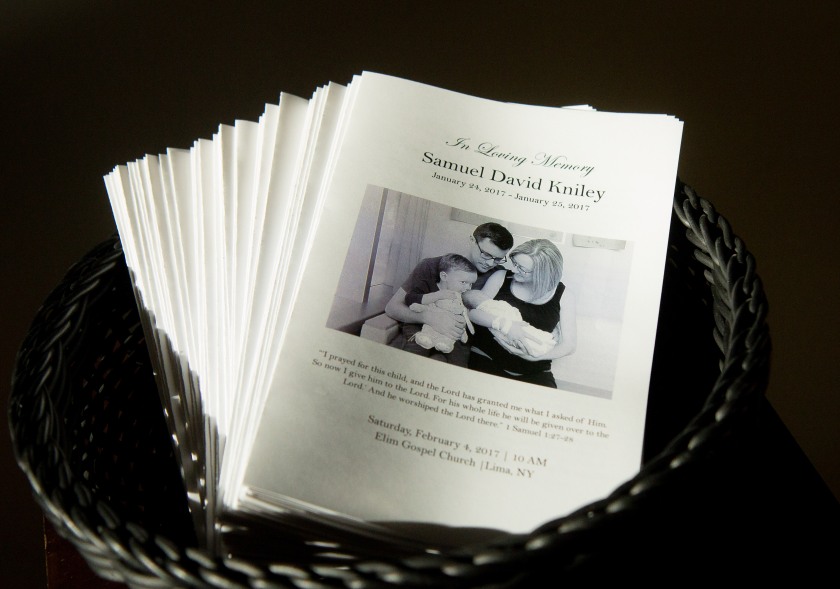 Samuel David Kniley was born on January 24, 2017 at 2:22 a.m. and passed away on January 25, 2017 at 4:30 p.m. His family was blessed with his sweet presence for nine special months during pregnancy and 38 beautiful hours after birth, before he was peacefully ushered into heaven while in the loving arms of his parents.

Samuel’s life was brief, but rich. Knowing his life might be short made every moment that much more precious for his family.

Life on the Inside: 9 Months

The news of this pregnancy came as a special Mother’s Day gift for Joanna, and an eagerly-awaited surprise for her and Bob. While safe inside the womb, Samuel got to join his big brother Daniel for lots of fun events: they visited a local farm and The Strong Museum of Play, had numerous playdates with Daniel’s friends and cousins, played at the beach, hiked at Letchworth, and took a safari ride at a wildlife park.

Samuel was there on a Sunday in June when his brother Daniel was dedicated at church, although no one knew his parents were secretly dedicating him too! Samuel had an epic summer: he attended his first baseball game and first wedding, took road trips to Pennsylvania and Baltimore, celebrated CT’s 10th anniversary, and made an international trip to China! He stayed at the Golisano Children’s hospital for four days in August when his brother was diagnosed with diabetes. That hospital became an important place for the Kniley family and their boys within the span of six months.

He celebrated the birthdays of his mom, dad and two-year-old brother. During the fall, Samuel attended his Great Grandpa Kniley’s funeral.  He helped vote in his first presidential election. He experienced his first Rochester winter, and joined extended family to celebrate his first Thanksgiving and Christmas. He even rang in his first New Year!

His favorite times of the day were listening to worship music while his mom cooked dinner, hearing his daddy’s voice when he came home from work, playing and getting “smooshed” by his big brother, and snuggling with his mom and brother in the rocking chair at bedtime.

Samuel joined his daddy at CT training events, sat outside while he worked in the garden, and he got to be there for the launch of his dad’s wedding photography business. He joined his dad for a special trip to Gettysburg with four generations of Kniley men. Samuel liked to tag along with both his parents on their weekly date nights and even a fall weekend getaway in Ithaca!

Life on the Outside: 38 Hours

Samuel was welcomed into this world with exclamations of joy and relief! For 38 hours he was surrounded by his loving family and given the best of care by the fantastic NICU team at Golisano Children’s Hospital. Against all odds and hospital visitor policies, he lived long enough to meet all of his aunts, uncles, and grandparents! He was loved, held and cherished by his mother, father, and brother.

As his brother Daniel summarized so well, now baby Samuel is “all done breathing” and “all done crying.” Samuel gets to grow up in Heaven now, with no more breathing tubes, no more tears, and no more Trisomy 18. He is finally free and healed! With his new perfect body he can grow up and learn to walk, talk, run and play, in the presence of God for eternity! His family will always remember him and miss him with all of their hearts until the day they are finally reunited again. Samuel was one of the greatest gifts his family has ever been given. 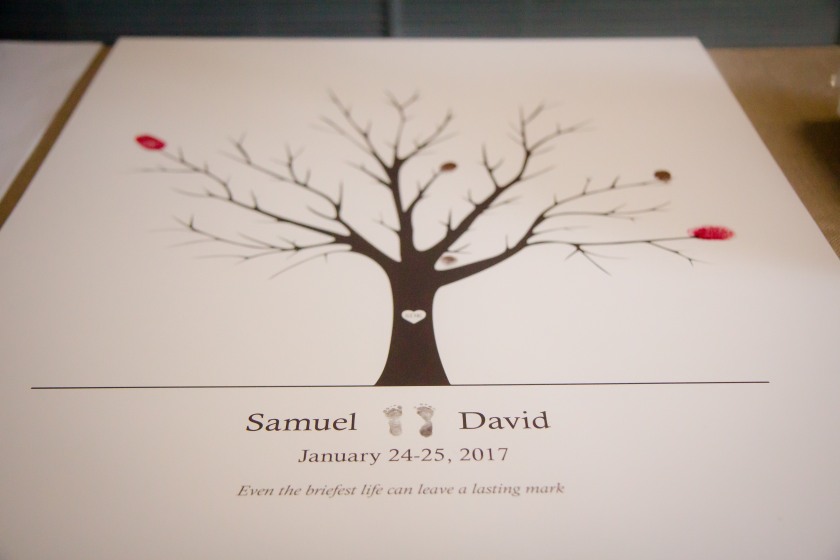 Hi, we're Bob and Joanna. We have a wonderful toddler named Daniel. Our second son, Samuel, was diagnosed with Trisomy 18 before he was born. He entered this world in January 2017 and shared 38 beautiful hours with us before he passed away. This is the story of our family's journey together.